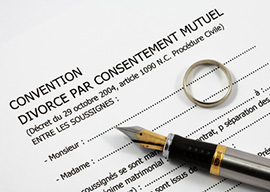 What is a divorce by mutual consent, or divorce through an amicable agreement, and how to get divorced without a judge?

Article 229-1 in the Civil Code states the following:

When the spouses agree on the breakdown of the marriage and its effects, they ascertain, assisted each by a lawyer, their agreement in the form of an act under private signature countersigned by their lawyers and established under the conditions provided for in Article 1374. This agreement is filed at the rank of minutes at a notary’s office; the notary controls its compliance with the formal requirements provided for in 1 ° to 6 ° of Article 229-3. The notary also ensures that the draft convention has not been signed before the expiry of the cooling off period provided for in Article 229-4. This deposit gives effect to the agreement by giving it a certain date and enforceability.

There are two exceptions in Article 229-2 of the Civil Code which oblige to attend a hearing before the Family Justice Judge:


Our lawyers’ practice in Lyons, specializing in divorce, can accompany you throughout the procedure, such as:


The average duration of the procedure

Between the first appointment and the signing of the divorce agreement varies between two and three months.
The average duration applies only to divorce in which the spouses agree on all measures of divorce: children's residence, alimony, property division and any countervailing benefits.

The fees of our Practice are fixed by packages between 900 € w/o VAT * (for spouses without child and without property and with similar incomes, and 1980 € w/o VAT * according to the complexity of the procedure.

If there are points of disagreement and the spouses wish to divorce by mutual consent, it will be necessary to consider negotiations between their lawyers, which does not allow to indicate a duration between the first appointment and the signature of the divorce agreement.