Divorce for misconduct in Lyons 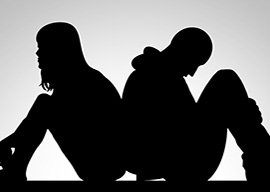 What is a divorce for misconduct?

Proceedings for misconduct can be brought against « facts constituting a serious or renewed violation of the duties and obligations of marriage » attributable to your spouse and making « intolerable the maintenance of cohabitation ».

The support of a lawyer is mandatory in such a case.

This is a longer procedure than other divorce proceedings and is structured around 4 steps:


Criteria to estimate the compensatory allowance

The judge takes into consideration in particular:


Domestic violence and mistreatment by spouse

It is very difficult for a victim to describe the abuse suffered and the physical and psychological consequences that result. Maître STRULOVICI takes a special care of the reception of the victims and will take the time to be at your disposal to advise you on the various possible procedures.

Every two and a half days in France, a woman loses her life under the blows of a spouse, a concubine or a former companion. The World Health Organization defines violence as follows: "Violence is the intentional use or threat of the use of physical force or power against oneself, another person, a group of persons, or a community, and with negative consequences (or at a high risk) on the physical, mental or social health of the person or the victim".

Domestic violence also affects men. Violence committed by women on men is of course much rarer, but actually exists and must be taken into account.

If you are a victim of violence, and want to seek redress and / or divorce, do not hesitate to contact our Practice.


Legal advice to victims of violence within the couple